Why is the Syfy Channel Anti-Scifi?

Ever since the Syfy Channel changed their name from SciFi to Syfy, I knew that they were going to be changing a lot more...  Why would a network that has aired extremely successful shows like Battlestar Galactica, try to change their name?  Do they not want to be known as the network that only makes science fiction shows..  Unless they want to change their entire business plan and start to look for an entirely different and new demographic, then the Syfy channel probably doesn't want to change much more than their name.

I read online today via i09 that the BSG prequel series, "Blood and Chrome" was being downgraded from a TV Movie/series to a webseries.  I can't understand why Syfy would think that was a good idea!  Do they feel that because Caprica failed, they can't recapture the same audience that Battlestar Galactica originally pulled.  There are really no science fiction shows that Syfy has on their current schedule.  And only just last week, Syfy recanted on their promise of a sixth season for Eureka, and instead opted to cancel it.  And what exactly have they lined up to replace it?????

Although I am guilty because I haven't seen Eureka, after seeing what their loyal fans have been writing on forums about their love for the show,I do feel the need to protect it.  Eureka had over 2 million viewers when season 4 premiered.  It's almost like Syfy has some type of curse/problem that makes them want to cancel great shows during their 4th season.  The same thing happened to Battlestar.  I would have watched another three seasons of that show, even if it wasn't as great as the earlier seasons...  Caprica was rushed onto the air, and for some reason, it just didn't captivate me (or anyone else) like BSG did...

But Syfy has to change more than just their TV show choices if they want to reach a wider audience.. For one thing, they need a better advertising scheme.  It always surprises me that Syfy doesn't have a huge presence at Comic-Con.  They don't have a booth on the exhibition floor.  Yes, I know they had a place in the Gaslamp, but I just don't understand why they wouldn't take advantage of all the scifi fans in one place!?! 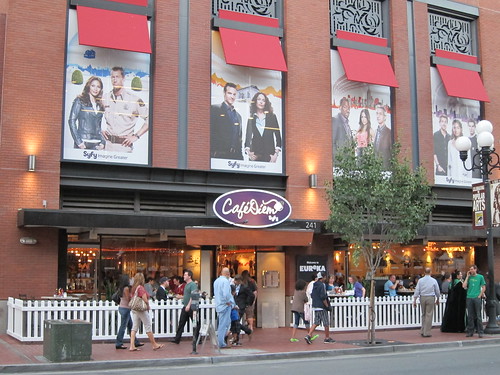 And finally, I've always wondered if Syfy can pick up shows that have been passed by other networks like 17th Precinct or even Dollhouse after it was canceled?  I mean can you imagine if Syfy had gotten Firefly before Fox canceled it? I bet it'd still be on the air!

Is there anyway that Syfy can redeem itself, and get back to what it knows best: ACTUAL SCIENCE FICTION!