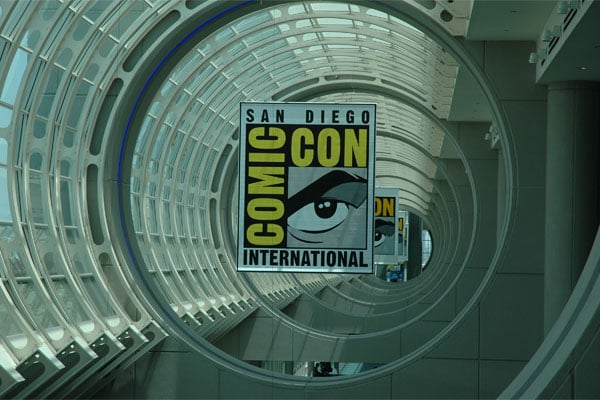 As March leaves us, fanboys and girls alike will begin saving every penny for their yearly trip to San Diego. The convention season has started, and Wonder-Con, Comic-Cons, sister convention is set to open this weekend in San Francisco. Thanks to being a poor college student, I wasn’t able to swing a trip to San Fran, and instead will be relying on my fellow fanboys and the internet to keep me up-to-date on new footage, and spoilers that appear at the Con.

I often wonder if I’m the only person who spends more time thinking about Comic-Con than school work. I highly doubt that I am, but lately, its been on my mind more than anything else. Last year I had an absolute blast at the Con. It was my first time going, and I got the most out of it. I learned the hard way about the lines to get into Hall H, and missed out on some awesome giveaways because I would spend all day in Ballroom 20, waiting to see the cast of Dexter. Just last night I made a pretty damn awesome Comic-Con collage from the free magazine that I got from Comic-Con. I’ve placed it on my wall in my dorm room, and look at whenever I need to be inspired to create a post for Frak Earth.

Cosplaying at its best.  It seems these two are more suited for their roles than Bosworth and Routh

Comic-Con is one of the few times in life that you can dress up as nerdy as you like, go insane over the geekiest things, and fanboy over original comicbooks, and still be accepted by society. If you dress up as Captain America, or Tron, everyone wants to take a picture with you. Try that in real life, and you’ll be shunned by the world. Comic-Con is a safe space for me, and even though my friends and parents think I’m the biggest nerd around, I felt pretty unnerdy when it came to Comic-Con. I didn’t know people loved Star Wars more than me until I saw them dressed in replicas that could even fool George Lucas.

These are not the droids you're looking for.

With Comic-Con still a few months away, don’t worry if you still haven’t purchased your ticket, or you aren’t sure what costume you’re wearing on Friday! I know with all the difficulties they had with selling tickets, Comic-Con has to resell tickets some time in June.

So fellow nerds, if you’re like me and still a student, finish school strong, and use your grades to try and talk your parents into putting half down for your hotel room. I can’t wait until July 22, and I know that you can’t either. See you at the Con.

Reply Pseurry
8:54 AM on September 8, 2021
https://buysildenshop.com/ - how long does viagra stay in system