Chuck was canceled and put back on the air simply because of it's huge fanbase, and honestly a huge part f that fanbase congregates at the San Diego Comic-Con each year to see their favorite show.  I wasn't able to attend last years panel, as it conflicted with the amazing Hall H schedule, but you can count on the fact that I'll be arriving early to get in line for Ballroom 20 to catch this panel.  And also, there may or may not be a performance my Jeffster!

Speilberg's expensive dinosaur show is going to be showcasing brand new footage for comic-con fans!  The pilot was set to premiere earlier this year, but now that the effects have been redone, I'm sure they're better than ever.  I will surely be on hand to see the brand new footage!

Last year I attended Joss Whedon's one on one in Ballroom 20 and had a wonderful time.  And, we got a guest appearance by Nathan Fillion.  If you can work it into your busy schedule, you have got to cath Joss's panle.  He's a wonderful guy to hear speak, and I'm sure he's going to have some awesome stories about The Avengers production!

It's made by the same people who made Angel, Buffy the Vampire Slayer, and The X-Files, have created a brand new show about a world where all stories have a storybook element.  But, that doesn't mean that they all have happy endings.

He'll also be on hand to join the The Walking Dead panel, but this year, he's getting his own panel. I'm going to try and hit this one up so that I can hear what he has in store for the comic version of The Walking Dead. 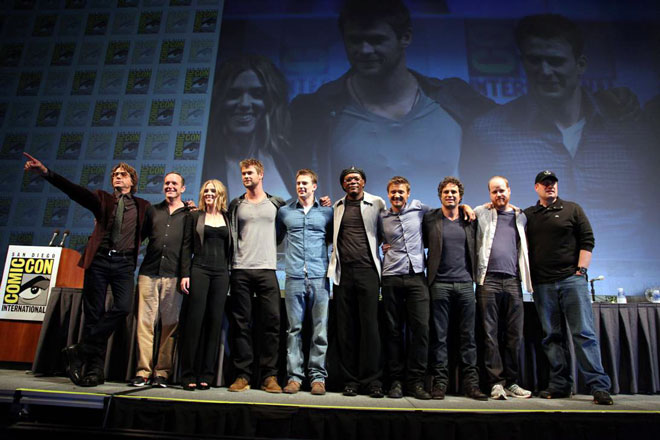 Reading the description for this Marvel panel, I've began to wonder if it's at this panel that some Avengers will convene?  My source from inside the comic-con programming team, did say that they (Marvel) were planning on separating their panels for the benefit for their fans.  Marvel also said that even though they opted out of a Hall H panel, they still planned on having a large presence at the Con.  We already know that Chris Evan is going to make some sort of appearance... Maybe this panel will be the one will all want to relive from last year???