How Would You Travel in the Wizarding World? 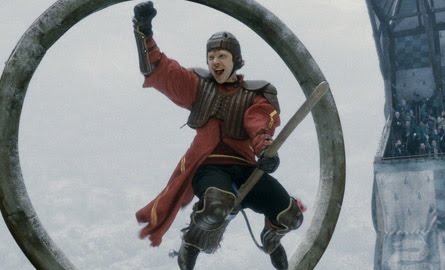 While reading Harry Potter, I've begun to question how I would travel if I was a witch.  It sounds ridiculous, but the more I've read, the more I've thought about how most wizards and witches travel.  We know that you can't apparate until your 17 (and you still have to pass a test), but do how to parents travel with children.  Dumbledore took Harry on a side along apparation trip in Harry's sixth year, and the trio (Ron, Harry and Hermione) spent most of The Deathly Hallows apparating together.  But if you have young kids, wouldn't it be extremely dangerous to apparate with them.  Ron splinched himself quite badly in The Deathly Hallows, but that was under extreme circumstances.

I'm sure that the Weasley family did not do side along apparation because that would mean too many trips back and forth for Molly and Arthur.  I'm pretty sure that you can only apparte with at most three people, otherwise you'd get splinched.

So, if wizards aren't traveling by apparation, are they traveling by floo powder, broom, or threstrals.  The Weasley's choose to travel by floo, but do families like the Malfoy's do the same?  The Malfoy's pride themselves on being extremely classy (and always pompous) so would that mean they apparate everywhere?  I'm sure when Draco was a baby they weren't allowed to apparate.  After seeing how dirty Harry got after using the Floo network in Chamber of Secrets, I'm guessing most families would choose not  to use the floo network. But besides that, is every place connected to the Floo network?  Hogwarts can't be directly apparated too, maybe the Floo network is the same.

Dumbledore has mentioned in the books, I believe it is Order of the Phoenix,  that when he travels long distances, he likes to use Thestrals because they have a great sense of direction.   Dumbledore may do this because you can't apparate across international borders..

After much thought, I've come to the conclusion that most wizards choose not to travel by broom.  But, I do think that many wizards and witches may use the Knight Bus, unless they're traveling a far distance.  Wizarding families will probably use the Floo Network, because of connivence and the safety over apparation.  And finally, I think that any witch or wizard over the age of 17 chooses to apparate over any other form of transportation.

So Potter fans, how would you travel if you were a witch or wizard?  Personally, I'd always choose to apparate!

Reply Rachael Severtson
7:51 PM on July 2, 2011
I would choose apparation of course! And thats a good question, maybe wizarding children just don't travel very much..? The floo network seems to get you fairly dirty, but then again just a wave of a wand will get rid of any dirt that gets on your clothes. also if you remember in the 6th one everyone was shocked that Harry had side along apparated before so clearly its not a common thing for parents to do with their children. The knight bus also seems like it would be fun but might make you sick to youre stomach. maybe some wizards use trains?? I know they seem agasint using anything that muggles set up, but then we have to wonder how did the whole wizarding family get to Egypt?? I'm assuming the floo network isnt connected from england to egypt but then again I guess we dont know.
I heard that in Pottermore you can read the books and click on things like wands or the Floo Network maybe and it will tell you a lot more detail about that particular part of the wizarding world that hasnt been released before, which I am really excited about!!!
PS. I luurve all the Harry Potter stuff you've been posting!

Reply heatherboer
10:17 PM on July 2, 2011
Well you make some very valid points on apparation, the floo network, a broom, and threstrals, but in my opinion apparation is the win win for me. For me the floo network is a way for big families to travel fast, or underage witches and wizards to use for travel. The bad thing with the floo network is that is (according to The Chamber of Secrets when Harry travels to Knockturn Alley) you seem to get dirty and there is no way that a pureblood wizarding family would want to travel that way. So the floo network would be out for them, apparation seems to be it for them and for many witches and wizards. The problem with brooms is that some people can just not fly them, does Hermione ring a bell. Some people are scared of heights, sometimes the weather is just shotty, and other times the distance could just be too far and people do not want to travel that way. For the Threstrals, well most people cannot see them so why would they want to ride on a "horse" if they cannot see what they are on, pretty freaky I must say. So going through all these points, apparation seems like the go to answer. I mean once you are seventeen there is no reason you should just not apparate and disappparate anywhere you want to go.
Maybe wizarding families with one or two children apparate and the families with more either use a Muggle train (like Rachael suggestes), or the floo network. Because lets face it most pureblood families only have like one or two children (not counting the Weasleys).
Oh my I lost all this Harry Potter postings!!! It makes me feel so excited to read but yet at the same time sad because I know that it will be ending soon.

Reply Rachyl
1:49 AM on July 3, 2011
Hmm you make some very valid points. But I would have to go with apparating just for the sake of getting everywhere quicker. I understand that it would probably be unsafe to do side-along appropriations with young children, because of splinching, but I think when wizard are older and more advanced in their magic they become very good and apparating and know if it would be safe or not to apparate their young children. Just like you said that Dumbledore did a side-along apparition with Harry, why couldn't adults side-along apparate with their children? Don't you think it would be easier to apparate with people smaller? I mean its probably takes less effort to side-along apparate with a small child then with a full grown adult or teenager.
I agree I think the floo network would get a little to dirty for pure-blood families and they would think themselves to proper to floo. I'm sure that they just apparate everywhere since it saves the most time and its seems that most pure-bloods don't like to waste their time.
As for the Knight Bus. I'm sure many witches and wizards use it because its convient and safer then apparating because all you have to do is stick out your wand hand and it appears and takes you where ever you need to go for a reasonable price.