Even though I haven't watched Torchwood yet, I've already had the pleasure of meeting Captain Jack (the main character in Torchwood) during the Ninth Doctor's first series.  Before I realized he had a show, I told myself that I would love to watch a show just about him.  His character is hilarious and absolutely absurd. I'm halfway through Doctor Who Series three, so I'll let you guys know just how amazing Torchwood is once I watch.. But seriously, check out this show if you love Doctor Who (or if you enjoy smart Scifi). 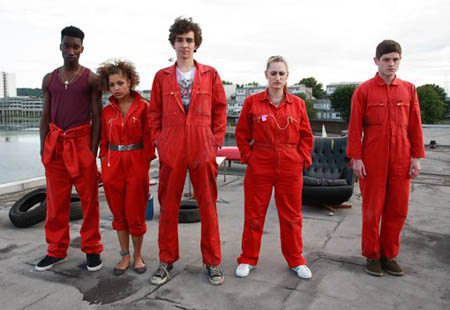 Who would have thought a show about four teenagers gaining superheroes could be so damn funny?  Although the show is a bit racy, think of it as M rated here in the states, the show is incredible funny.  Led by up-and-coming young comedian, Robert Sheehan, the show tells the story of five young people who discover they've been gifted superhero powers through a freak storm.   Not only is the show funny, it's acting is also superb.  Lauren Sosha, who plays Kelly, just picked up a BAFTA Award for her work.  The third series is set to premiere later this year, but will be without Robert Sheehan, who has opted to try his luck across the pond in Hollywood.  If you haven't started Misfits yet, check it out online..

From the creative mind behind Doctor Who, Steven Moffat has brought us this fabulous series that involves Sherlock Holmes and his partner Doctor Watson solving crimes in modern times. Benedict Cumberbatch and Martin Freeman are the perfect Sherlock and Watson.  It's an extremely witty show, but unfortunatly only four episodes have aired so far.. But the good news is the episodes are over an hour long, and three of them are available on Netflix Instant Stream!

It's no surprise that Doctor Who is number one on my list (sorry, I'm a bit obsessed).  When you think of great science fiction, and British culture, my mind always goes straight to Doctor Who.  For those that aren't familiar with Doctor Who, it's a television show about a Time Lord who travels through time with a companion to save the universe from the likes of Daleks, Cybermen, and many other evil beings...  The Doctor is funny, witty, attractive, and extremely brilliant.  And recently, the series has gotten even crazier.  The series six mid-season cliffhanger was perfect, and I cannot wait to see it play out in the next episode titled Let's Kill Hitler when the Doctor returns in September.  If your gonna watch only one show on this list, I'd choose Doctor Who.

Reply ktleavs
7:52 PM on June 24, 2011
As a Doctor Who fan and a Misfits fanatic I totally agree with this post EVERYONE should watch these shows! British TV is AMAZINGGGGGGggg!

Reply jason brees
3:40 AM on October 29, 2011
I watch Torchwood tv show. And In my opinion I think this is the best sci-fi tv show that I have ever seen.

Reply Propecia
7:46 AM on September 10, 2021
Isotretinoin For Sale Internet