Hit-Girl is Getting Her Own Comic 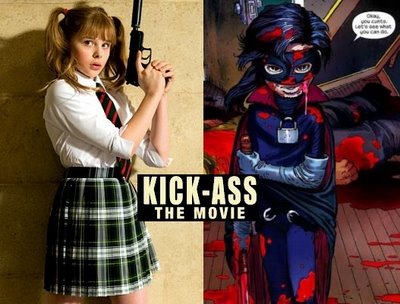 Hit-Girl is one of the stars of last years, Kick Ass, and was brought to life by the awesomely badass Chloe Moretz, and today we bring news that will make all the fanboys go crazy!  Creater Mark Miller has announced the Hit-Girl is getting her own comic book! The series will be coming out this September!!  I'm super stoked for this, since I've been pretty bored with the first two issues of Kick Ass 2, and really just want more Hit-Girl.  Here's what Miller had to say about the Hit-Girl comic.

"This is Hit Girl in her own ongoing book because I found that as I was writing the 'Kick-Ass' comic, Hit Girl would almost take it over because she was so much fun to write. When I was writing 'Kick-Ass 2' I found myself just desperate to write Hit Girl, but I had to force myself to give Kick-Ass as many scenes as possible because it was his book. So since I had so many ideas for Hit Girl that I couldn't fit into one book, so I've just spun it off into a solo title. It made perfect sense. Everyone coming out of the movie or reading the comic just wanted more Hit Girl, so you needed more stories of her."

How do you feel about this new comic?  Would you rather see Hit-Girl get her own feature film, or see Kick Ass 2????